Situation on the financial market 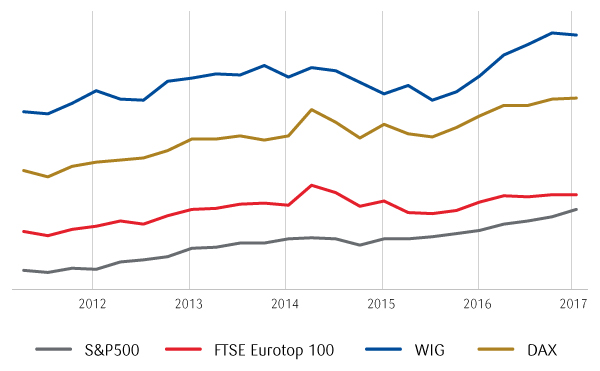 The year 2017 turned out to be very profitable for the majority of stock markets worldwide, including the Warsaw Stock Exchange. The WIG index went up by more than 23% and continued the excellent streak which began last year in the middle of November. The first four months of the year were particularly successful, whereas in the following months the upward tendency weakened considerably. The good situation was a result of global factors (a good situation on the international financial markets) and to local ones (excellent data from the Polish economy and growing profits of companies). The stock exchanges worldwide grew as a result of stable economic growth in nearly all countries, accompanied by the temperate attitude of the majority of the central banks, which indicated there was no hurry in tightening the monetary policy. The inflation pressure remained moderate, which enabled the central banks to maintain mild monetary conditions, in particular low interest rates. Interest rates were raised only in a few countries but the changes were made cautiously, both with regard to their scale and dynamics. It was the same in Poland where the Monetary Policy Council toned down the speculations concerning interest rate increases. Fast economic development which translated into profits for companies, in combination with a mild monetary policy resulted in the WIG index being near a historic record. 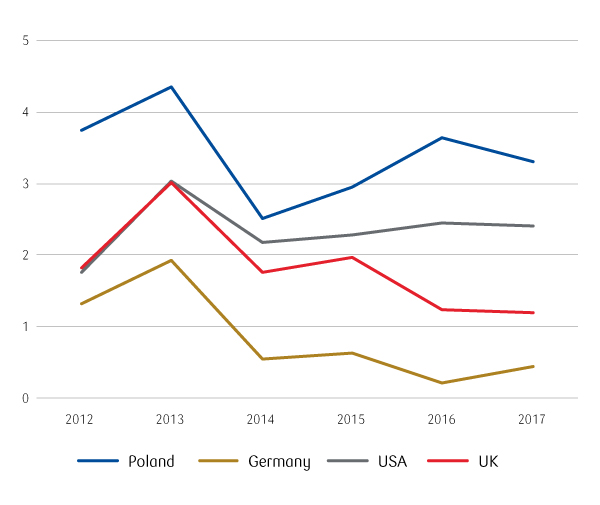 In 2017, the Monetary Policy Council maintained the reference rate without any changes at a level of 1.50% and suggested a low probability of changes in the monetary policy at least until the end of 2018. As a result, the 3- and 6-month rates on the interbank monetary market remained at 1.72-1.73% and 1.81% respectively. Stabilization of the core interest rates accompanied by the mild rhetoric of the central bank strengthened the valuations of Treasury bonds and neutralized the negative effects of growing inflation and increasing salary pressure in the corporate sector. The decrease in profitability of Treasury securities was additionally due to a clear improvement in public finance. The state budget deficit turned out to be considerably lower than planned which led to a strong drop in the supply of Treasury securities on the primary market in the second half of the prior year and growing interest in these securities on the secondary market, and this in turn translated into a drop in their profitability. The increased profitability of Polish bonds was also due to the mild rhetoric of the main central banks concerning the tightening of the monetary policy. As at the end of December, the profitability of Treasury bonds in the 2-year sector went down by 32 b.p. to 1.71%, in the 5-year sector by 24 b.p. and in the 10-year sector by 33 b.p. to 3.30%. 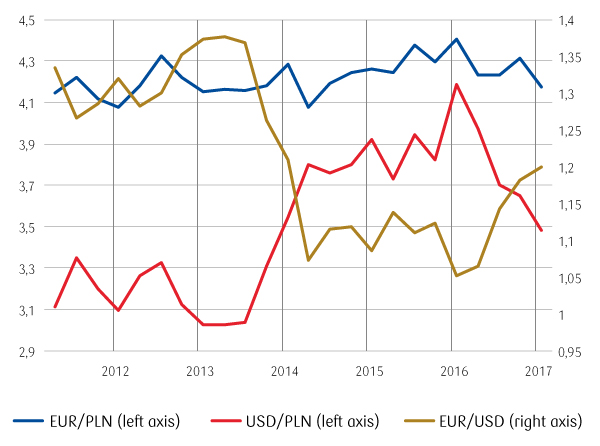 The EUR/USD rate at the start of 2017 amounted to 1.05 and to 1.20 at the year-end. With the exception of the beginning of January, when the rate went down to nearly 1.03, it gradually went up throughout the year. This happened despite the three interest rate increases by the American central bank the Fed (in March, June and December) and starting the process of reducing the balance sheet in October (by only partially supplementing the gaps in the balance sheet after matured bonds which were taken up as part of three purchase tranches). At the same time, the European Central Bank (ECB) was considering closing the asset purchase programme, which had a positive effect, for some considerable time, on the attitudes towards the Euro on the global markets. However, finally, the ECB decided to extend the programme until September 2018.

The dismissal of the risk of disintegration of the Eurozone was the factor which improved the investment moods towards the common currency in 2017. This resulted from E. Macron’s victory in the presidential elections in France and the attitude of the Fed which kept the financial markets in uncertainty as to the perspectives of interest rate increases in the United States.

The EUR/PLN exchange rate at the start of 2017 amounted to 4.40 and at the year-end it amounted to 4.18. Following the drop in the exchange rate to 4.23 at the end of the first quarter, in subsequent months the exchange rate became stable, which was due to improved investment moods on the global markets. The reduced restrictions on buying foreign currencies in China was motivation for the depreciation of the zloty and an increase in the exchange rate to 4.31 as at the end of the third quarter. This translated indirectly into the weakening of the currencies of emerging markets, including the Polish zloty. In the last quarter, the EUR/PLN exchange rate dropped again to around 4.20 thanks to very good data flowing in from the Polish economy and the stabilization of the situation on the Chinese currency market.