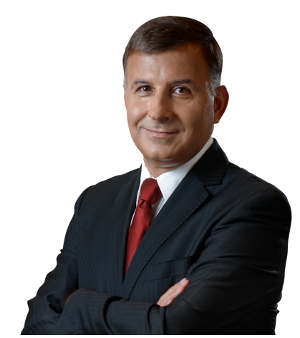 I have the pleasure of presenting the annual report of the PKO Bank Polski Group. Traditionally we have reported good results, and we are continuing the tradition in 2017. It was a very good period both for the Polish economy and PKO Bank Polski. The GDP growth rate, mainly driven by investments, accelerated to 5 percent at the turn of 2017/2018. Research shows that both consumers and enterprises are looking forward with optimism.

The Bank’s strategy is closely related to Poland’s economic development; therefore, by carrying out our mission “We support the Growth of Poland and the Poles”, we continuously provide our customers with modern financial solutions adequate to their needs and ambitions, at the same time increasing the scale of our business and generating sound profits, which are the highest in the banking sector. As a result, we achieved an increase in the amount of assets, the number of customers and market capitalization. Consequently, as at the end of 2017, the market value of PKO Bank Polski was PLN 55 billion, making it the most valuable company listed on the Warsaw Stock Exchange.

The net profit generated by the PKO Bank Polski Group in 2017 exceeded PLN 3.1 billion and was 8 percent higher than in 2016. Due to strict cost controls, we managed to reduce the C/I ratio to 46 percent, and due to prudent risk management we reduced the ratio of loans with recognized impairment to 5.5 percent. At the same time, the cost of risk decreased to 71 bp.

The total assets of the PKO Bank Polski Group increased in 2017 by more than PLN 11 billion to nearly PLN 297 billion. This means that the second largest bank in Poland is more than PLN 100 billion behind us. The scale of our operations is reflected in our market shares in the key segments of the financial market. The Group has a leading position on the deposit market (17.9 percent), the loan market (17.7 percent), the lease market (12.0 percent) and the non-dedicated investment fund market (17.2 percent).

However, our ambitions are much greater than just being the biggest. Therefore, the prevailing theme of PKO Bank Polski’s development strategy is digital transformation, both of interbank processes and services offered to customers. This is the key to transforming the biggest bank in Poland and the region into an efficient organization focused on the needs of its customers and exceeding their expectations, while at the same time maintaining the leading position in the sector. In order to achieve this objective, we use innovative solutions developed in cooperation with technological start-ups, develop mobile channels and implement advanced data analytics. As a result, we not only strengthen our relations with the existing customers, but also attract more and more new ones, particularly among the younger generation. In 2017, the number of our customers increased by 300,000, and the number of current accounts maintained exceeded 7 million.

Customers are drawn to our Bank by such things as, for example, easy access to their funds and the possibility of managing them from a mobile phone, which is provided by our flagship mobile banking application IKO, to which we regularly add new functionalities. It should also be noted that IKO is the most popular mobile banking application in Poland. To date, it has been activated by 2.3 million users and this number is growing constantly. The same is true about the volume of transactions. IKO is the best mobile banking application in the world according to the ranking published by a British magazine Retail Banker International, before the applications offered by such giants as Bank of America, Capital One or JP Morgan.

We also use our remote channels to popularize the digital services provided by public administration. Today our customers can use our electronic banking platform to apply for parental benefits, access social insurance data, perform income tax settlements or register their business and open a business bank account at the same time, all without the need to leave home. In 2017, the number of Trusted Profiles established by our customers on iPKO and Inteligo exceeded 200,000, and the number of requests for benefits from the Rodzina 500+ programme was close to 180,000. PKO Bank Polski was the pioneer in this area. Thanks to our involvement, other Polish banks also started to make such services available on a mass scale, using the sector’s experience in the remote verification of customers’ identity, thus opening an entirely new chapter in the development of e-administration.

Although we operate mainly in Poland, our customers (particularly in the corporate segment) expect us to provide them with financing and advice not only in Poland, but also on foreign markets. It is a natural consequence of a growing number of successful attempts of Polish companies at international expansion. Therefore, the development of international and transactional banking is one of the major elements of our strategy. The branch of PKO Bank Polski in the Czech Republic began operating in 2017. The branch in Prague is the second foreign branch of the Bank, after the branch in Frankfurt, which was opened in December 2015. Despite their short history, both foreign branches have already achieved their planned profitability and offer promising prospects for the future development of this segment of our operations. In the past year, we also provided an online Export Support Platform to our corporate customers. It is a complex analytical tool comprising up-to-date economic data and in-depth reports, as well as a compendium of knowledge on various markets and industries, which is particularly valuable for companies planning foreign expansion.

The development of our Group is generally organic in nature and is based on the constant improvement of the individual business lines. However, in favourable circumstances, we speed it up through selective acquisitions, which bring added value for our shareholders. The purchase in 2017 of 100 percent of the shares in ZenCard Sp. z o.o., a start-up offering advanced tools and support for the process of constructing loyalty programmes, is one example. In the first year of being a part of the PKO Bank Polski Group, the company prepared two large projects with nationwide retail chains. At the beginning of 2018, the ZenCard technology was made available to the Bank’s corporate customers, providing them with a simple and easily accessible solution which they can use to increase their sales and create their own databases of loyal customers. Furthermore, this solution supports the development of non-cash transactions in Poland.

In the previous year, the Group also acquired KBC TFI SA, which will be combined with PKO TFI SA in the coming months. Both companies managed assets with a combined value of nearly PLN 30 billion as at the end of the year. Their merger will further accelerate the growth of PKO TFI SA, which is already the leader of the retail funds segment.

The projects described above, which were carried out in 2017, are only a small percentage of the wide range of events and initiatives reported in the Directors’ Report on the operations of the Group. Nevertheless, they allow us to look into the future of our organization with optimism. It is because they prove beyond any doubt that PKO Bank Polski has a strong business foundation, and therefore it has started the hundredth year of its operations with renewed energy and determination to take up new  hallenges. While remaining faithful to our mission, we constantly build up our appetite for future success, which will benefit not only our shareholders, customers and employees, but also the whole of the Polish economy.

Zbigniew Jagiełło
President of the Management Board
PKO Bank Polski