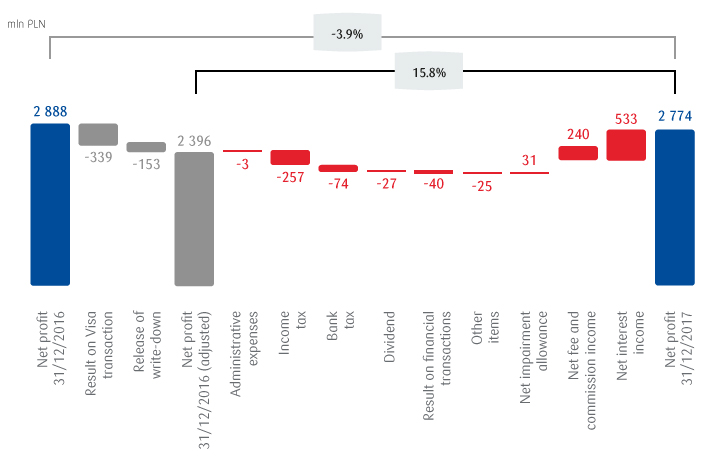 The result on business activities in the income statement of PKO Bank Polski SA for 2017 amounted to PLN 11,246 million and was PLN 263 million, i.e. 2.4% higher than in 2016, mainly as a result of an increase in net interest income of PLN 533 million y/y and net fee and commission income of PLN 240 million y/y, accompanied by a decrease of the result on financial transactions of PLN 458 million y/y.

After eliminating the most significant one-off events from 2016, including:

Net interest income generated in 2017 amounted to PLN 7,901 million and was PLN 533 million higher than in the prior year. The improvement was due to an increase in income related to the increase in the loan portfolio and the securities portfolio, accompanied by a slight increase in borrowing costs.

Net commission income in 2017 amounted to PLN 2,687 million and was PLN 240 million higher than in the prior year.

The level of net fee and commission income in 2017 was mainly affected by the following factors:

Net other income generated in 2017 amounted to PLN 658 million and was PLN 510 million lower than that generated in 2016. The amount of the net income for 2017 was mainly affected by a decrease in net income on investment securities (PLN -461 million y/y), which was due to the settlement (in June 2016) of the acquisition of Visa Europe Limited by Visa Inc., in which PKO Bank Polski SA participated; on this account the amount of PLN 418 million was recognized in the Bank’s result.

Net other income (in PLN million)

In 2017, general administrative expenses amounted to PLN 5,037 million and were 0.1% higher y/y. Their level was mainly influenced by:

The operating effectiveness of PKO Bank Polski SA measured with the C/I ratio in annual terms amounted to 44.8% and improved by 1.0 p.p. y/y thanks to an improved result on business activity (+2.4% y/y), accompanied by an increase in administrative expenses (+0.1% y/y).

In 2017, the Bank incurred entertainment costs, expenditure on legal services, marketing services, public relations and social communication services and advisory services related to management in the total amount of PLN 138 million, which represented 2.7% of the Bank’s total administrative expenses. 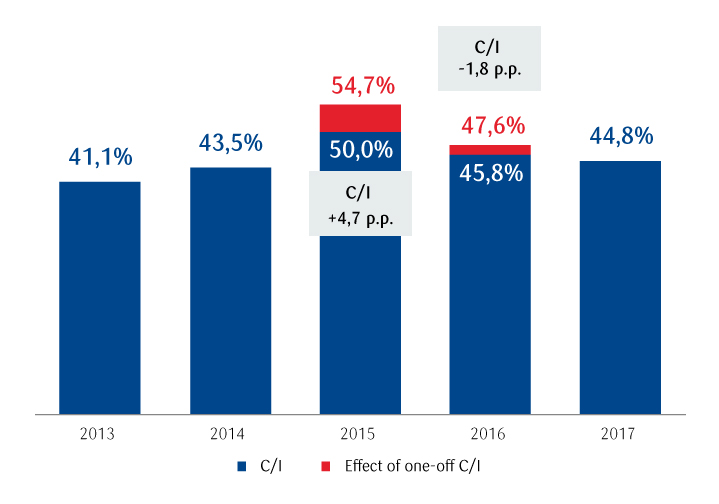 The amount of the net impairment allowance and write-downs is a result of PKO Bank Polski SA continuing its conservative policy applied in the valuation of credit risk and an increase in the loan portfolio.

Net impairment allowance and write-downs in 2017 amounted to PLN -1,530 million and was PLN 121.7 million worse that that obtained in 2016. The deterioration in 2017 occurred as a result of an increase in allowances for depreciation of securities and assets and the deterioration of the result on the portfolio of consumer loans.